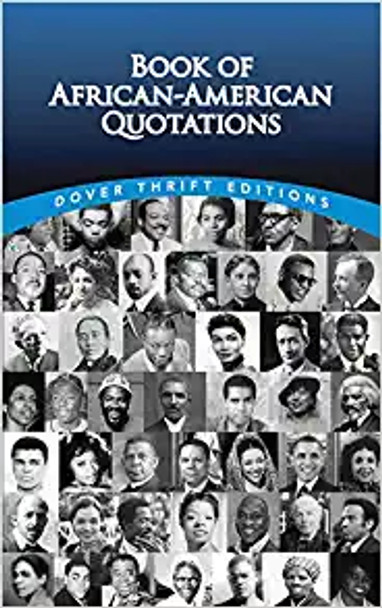 "In America, black is a country," declared Amiri Baraka, who insisted that the lives and destinies of the nation's white and black citizens are inseparably intertwined. His statement, like many others in this compilation of quotations, reflects the black experience in America and touches upon the role of racial identity. Other citations voice a broader perspective, including Maya Angelou's remark, "Life is not measured by the number of breaths we take, but by the moments that take our breath away."
This original collection of quotations cites approximately 100 well-known African-Americans from all walks of life. Twentieth-century notables include Louis Armstrong, Muhammad Ali, Julian Bond, and Ralph Ellison, in addition to earlier figures such as George Washington Carver and Frederick Douglass. Sources include poetry and works of fiction as well as song lyrics. Arranged alphabetically by author, the quotations cover a wide variety of subjects. Brief captions identify the quoted individuals and the achievements for which they are best known.

ALL NIGHT, ALL DAY - A CHILD'S FIRST BOOK OF AFRICAN-AMERICAN SPIRITUALS

MSRP:
Now: $17.95
Was:
A selection of twenty spirituals, that distinctive music from the time of slavery. Includes piano accompaniment and guitar chords. HC, children's book.

MSRP:
Now: $10.95
Was:
The courage and accomplishments of the men and women represented in this collection of Knowledge Cards—from educator, editor, and writer W. E. B. Du Bois (cover) to civil rights leader Martin Luther...

MSRP:
Now: $27.00
Was:
When William Evans and Omar Holmon founded Black Nerd Problems, they had no idea whether anyone beyond their small circle of friends would be interested in their little corner of the internet...

Girls Made of Snow and Glass

MSRP:
Now: $18.99
Was:
Sixteen-year-old Mina is motherless, her magician father is vicious, and her silent heart has never beat with love for anyone―has never beat at all, in fact, but she’d always thought that fact...

MSRP:
Now: $40.00
Was:
From the Pulitzer Prize-winning photojournalist and New York Times bestselling author, a stunning and personally curated selection of her work across the Middle East, South Asia, and...

2022 Women Who Broke Glass Ceilings Wall Calendar: 12 Legendary Women Who Always Persisted and Fought Their Way to the Top

MSRP:
Now: $14.99
Was:
From artists to activists, athletes to scientists, applaud and admire the fearless trailblazers who built a bridge forward for all women! Filled with dynamic, breathtaking art and groundbreaking...

MSRP:
Now: $30.00
Was:
With stunning images of natural hair and gorgeous, inventive visual storytelling, GLORY puts Black beauty front and center with more than 100 breathtaking photographs and a collection of powerful...

GET OFF YOUR ASS AND RUN!

MSRP:
Now: $7.00
Was: $13.95
Is there a large ass-shaped dent in your sofa? A gym membership burning a hole in your bank account? Does the sight of your wobbly thighs leave you cowering under a blanket? Then it’s time you faced...