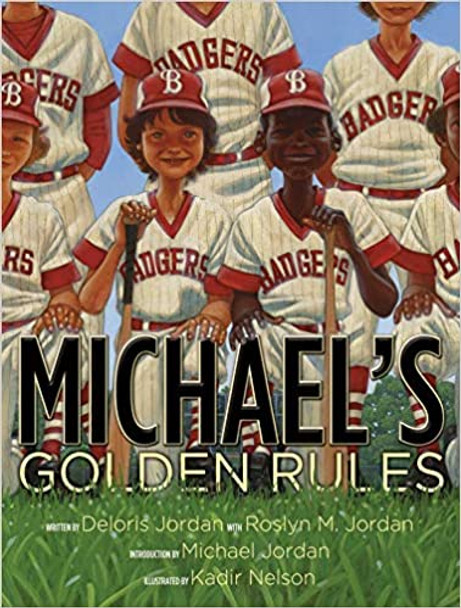 New York Times bestselling team Deloris and Roslyn M. Jordan, Michael Jordan’s mother and sister, are back with this inspiring picture book about playing a good game, win or lose—featuring an introduction from Michael Jordan!

Jonathan loves playing with his friend Michael on the Badgers baseball team, but being a Badger isn’t always easy. Lately, his team has been striking out again and again, and Jonathan wants a win more than anything.

But Michael’s Uncle Jack tells the boys that there is a lot more to playing a good game than winning or losing like trying your best, being a team player, and having fun. Once Jonathan starts playing by Jack’s golden rules of baseball, his confidence returns, and win or lose, he feels like a winner.

THE PLAYBOOK: 52 RULES TO AIM, SHOOT, AND SCORE IN THIS GAME CALLED LIFE

MSRP:
Now: $14.99
Was:
A New York Times Bestseller!You gotta know the rules to play the game. Ball is life. Take it to the hoop. Soar. What can we imagine for our lives? What if we were the star players, moving and...

MSRP:
Now: $29.99
Was:
Let Love Rule is a work of deep reflection. Lenny Kravitz looks back at his life with candor, self-scrutiny, and humor.“My life is all about opposites,” he writes. “Black and...

MSRP:
Now: $2.25
Was:
12" Wooden Ruler made in U.S.A of American-grown basswood, with standard and metric scale on one side, a list of jazz musicians and composers on the other.Made in United States of America

The First Rule of Punk

MSRP:
Now: $16.99
Was:
There are no shortcuts to surviving your first day at a new school - you can’t fix it with duct tape like you would your Chuck Taylors. On Day One, twelve-year-old Malú (María...

9 RULES OF ENGAGEMENT: A MILITARY BRAT'S GUIDE TO LIFE AND SUCCESS

MSRP:
Now: $17.99
Was:
The Emmy award-winning news anchor of Outnumbered Overtime with Harris Faulkner and co-host of the talk show Outnumbered shares the lessons she learned growing up in a military family paying homage...