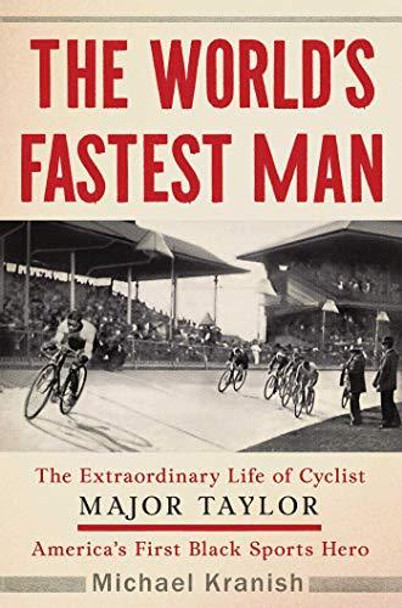 In the tradition of The Boys in the Boat and Seabiscuit, a fascinating portrait of a groundbreaking but forgotten figure—the remarkable Major Taylor, the black man who broke racial barriers by becoming the world’s fastest and most famous bicyclist at the height of the Jim Crow era.

In the 1890s, the nation’s promise of equality had failed spectacularly. While slavery had ended with the Civil War, the Jim Crow laws still separated blacks from whites, and the excesses of the Gilded Age created an elite upper class. Amidst this world arrived Major Taylor, a young black man who wanted to compete in the nation’s most popular and mostly white man’s sport, cycling. Birdie Munger, a white cyclist who once was the world’s fastest man, declared that he could help turn the young black athlete into a champion.

Twelve years before boxer Jack Johnson and fifty years before baseball player Jackie Robinson, Taylor faced racism at nearly every turn—especially by whites who feared he would disprove their stereotypes of blacks. In The World’s Fastest Man, years in the writing, investigative journalist Michael Kranish reveals new information about Major Taylor based on a rare interview with his daughter and other never-before-uncovered details from Taylor’s life. Kranish shows how Taylor indeed became a world champion, traveled the world, was the toast of Paris, and was one of the most chronicled black men of his day.

From a moment in time just before the arrival of the automobile when bicycles were king, the populace was booming with immigrants, and enormous societal changes were about to take place, The World’s Fastest Man shines a light on a dramatic moment in American history—the gateway to the twentieth century.
View AllClose

MSRP:
Now: $22.95
Was:
Four-year-old TJ spends his days on his lively Harlem block playing with his best friends WT and Blinky and running errands for neighbors. As he comes of age as a "Little Man" with big dreams, TJ...

HOW TO LOVE A BLACK MAN

MSRP:
Now: $16.00
Was:
In this book, relationship expert Dr Elmore sheds light on the hidden emotional psychological recesses of the black man's inner world. In firm and engaging language, he provides advice and real-life...

Major: A Black Athlete, a White Era, and the Fight to Be the World's Fastest Human Being

MSRP: $14.00
Now: $12.00
Was: $30.00
The story of a man who transcended the handicaps of race to become America's first African American mega sports celebrity   At the turn of the 20th century, hundreds of lightning-fast racers won the...

Uncomfortable Conversations with a Black Man

MSRP: $17.95
Now: $5.00
Was:
From 1932 to 1972, the United States Public Health Service conducted a non-therapeutic experiment involving over 400 black male sharecroppers infected with syphilis. The Tuskegee Study had nothing to...

MSRP:
Now: $18.89
Was:
Come one! Come all!To a party today in Harlem. Celebrate the great men and women of the Harlem Renaissance. Lonnie and his uncle Bates go on an unforgettable journey back in time to the Harlem...

MSRP:
Now: $14.99
Was:
The thrilling sequel to the Hugo and Nebula-winning Binti by Nnedi Okorafor It's been a year since Binti and Okwu enrolled at Oomza University. A year since Binti was declared a hero for...

THE DJINN FALLS IN LOVE AND OTHER STORIES

MSRP:
Now: $15.99
Was:
A fascinating collection of new and classic tales of the fearsome Djinn, from bestselling, award-winning and breakthrough international writers. Imagine a world filled with fierce, fiery beings,...

SHOOK ONE: ANXIETY PLAYING TRICKS ON ME

JUMP: TAKE THE LEAP OF FAITH TO ACHIEVE YOUR LIFE OF ABUNDANCE

MSRP:
Now: $25.99
Was:
On January 13, 2016, at the close of a taping of Family Feud, Steve Harvey spontaneously began to speak. Not knowing that the cameras were still rolling, the $100 million-dollar host offered his...

MSRP:
Now: $15.00
Was:
A stranger could drive through Miguel Street and just say Slum! because he could see no more. But to its residents this derelict corner of Trinidad s capital is a complete world, where everybody is...

MSRP:
Now: $20.00
Was:
An inspiring collection of essays by black women writers, curated by the founder of the popular book club Well-Read Black Girl, on the importance of recognizing ourselves in literature. "A brilliant...

MSRP:
Now: $15.00
Was:
Michael Bernard Beckwith - the dynamic spiritual leader who touched millions of readers and viewers in The Secret and through the spiritual community he founded, the Agape International Spiritual...

MSRP:
Now: $8.95
Was:
Ages 4-8Eight-year-old Conrad loves Pinger Park. He knows it's a special place. It's where he and his friends play. It's where colorful fish swim and where pretty flowers grow. It's where people who...