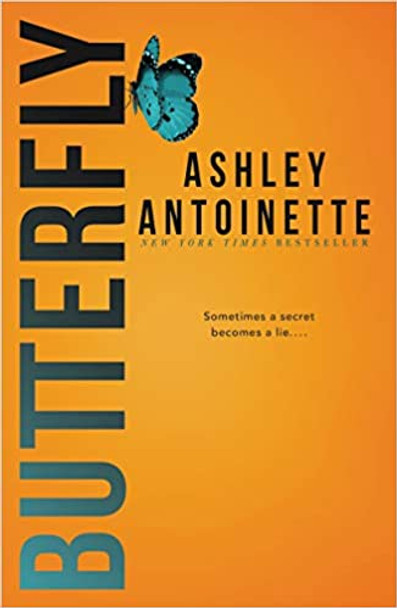 “Run away from the boy that gives you butterflies, he's going to break your heart.” Morgan Atkins had been told that phrase ever since she was a little girl and still she allowed herself to fall for the boy that made her heart flutter. After losing her first love, Morgan is terrified to love again. She's settled for a comfortable life with a respectable man. She has everything. She's living in the lap of luxury and although she's comfortable, she's bored out of her mind. When a ghost from her past blows into town, she finds herself entangled in an illicit affair. It's wrong, but she can't fight the butterflies he gives her and honestly, she doesn't want to. She can't hide the natural attraction she feels and soon, she's so deep involved that she can no longer tell where the boundary between right and wrong lies. Her heart is telling her one thing, but her head is saying another. Morgan Atkins has always been a spoiled girl and she tries to have it all, but when she's forced to choose between a good man and a bad boy, someone will end up hurt. Someone just may end up dead. Morgan Atkins has been through more tragedy than one girl can bear. Will she weather this storm? Or will the ultimate heartbreak ruin her for good?
View AllClose

PRAISE SONG FOR THE BUTTERFLIES (PB)

MSRP:
Now: $15.95
Was:
Abeo Kata lives a comfortable, happy life in West Africa as the privileged nine-year-old daughter of a government employee and stay-at-home mother. But when the Katas' idyllic lifestyle takes a turn...

MSRP:
Now: $16.99
Was:
“One of the biggest names in urban-fiction.” - Red Carpet Crash on Butterfly The hardest thing Morgan Atkins has ever done is let go of love. After losing Messiah, she never thought...

MSRP:
Now: $16.99
Was:
“One of the biggest names in Urban-fiction, Ashley Antoinette, is back … An intense start to this new series with characters that are real and genuine. It’s a story about love, trying to put the past...

MSRP:
Now: $14.95
Was:
Breaking the global record for streams in a single day, nearly 10 million people around the world tuned in to hear Kendrick Lamar's sophomore album in the hours after its release. To Pimp a...

MSRP:
Now: $9.99
Was:
Venus Johnston debuted with brazen personality and spirited humor in Nappily Ever After as she searched for the holy grail of marriage. Blessed with a beautiful baby daughter and a husband...

MSRP:
Now: $14.00
Was:
Imagine This is the sequel to Vickie Stringer's bestselling Let That Be the Reason, her stunning debut novel based on life as she knew it in the shocking underworld of the sex and drug trade. Vickie...

MSRP:
Now: $14.99
Was:
The thrilling sequel to the Hugo and Nebula-winning Binti. It’s been a year since Binti and Okwu enrolled at Oomza University. A year since Binti was declared a hero for uniting two...

MSRP:
Now: $10.99
Was:
Simone Garcia-Hampton is starting over at a new school, and this time things will be different. She's making real friends, making a name for herself as student director of Rent, and making a play for...

MSRP:
Now: $9.99
Was:
Coming of age in the Badlands of north Philadelphia--one of the toughest and poorest communities in the country--Tonya Morris has had to make some desperate and, at times, ruthless moves in her bid...

MSRP:
Now: $14.99
Was:
Praised as "exuberantly engaging" by the Los Angeles Times and a "beautiful, beautiful piece of writing" by the Houston Post, acclaimed artist Ntozake Shange brings to life the story of a young...

MSRP:
Now: $11.99
Was:
Award-winning author Tiffany D. Jackson delivers another riveting, ripped-from-the-headlines mystery that exposes horrific secrets hiding behind the limelight and embraces the power of a young...

Girls Made of Snow and Glass

MSRP:
Now: $18.99
Was:
Sixteen-year-old Mina is motherless, her magician father is vicious, and her silent heart has never beat with love for anyone―has never beat at all, in fact, but she’d always thought that fact normal...

ONE NIGHT IN GEORGIA

MSRP:
Now: $16.99
Was:
At the end of a sweltering summer shaped by the tragic assassinations of Martin Luther King, Jr., and Bobby Kennedy, race riots, political protests, and the birth of Black power, three coeds from New...

DAPPER DAN: MADE IN HARLEM

MSRP:
Now: $28.00
Was:
With his now-legendary store on 125th Street in Harlem, Dapper Dan pioneered high-end streetwear in the 1980s, remixing classic luxury-brand logos into his own innovative, glamorous designs. But...