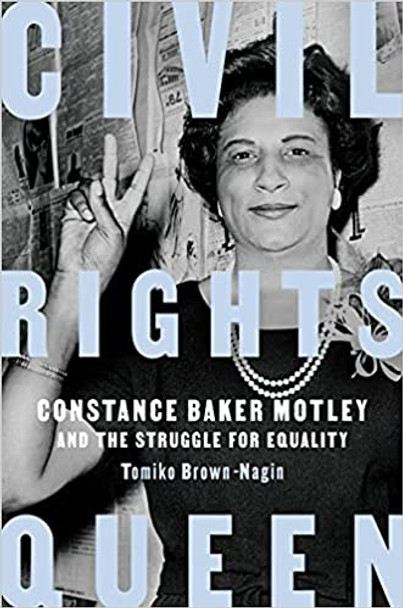 Born to an aspirational blue-collar family during the Great Depression, Constance Baker Motley was expected to find herself a good career as a hair dresser. Instead, she became the first black woman to argue a case in front of the Supreme Court, the first of ten she would eventually argue. The only black woman member in the legal team at the NAACP's Inc. Fund at the time, she defended Martin Luther King in Birmingham, helped to argue in Brown vs. The Board of Education, and played a critical role in vanquishing Jim Crow laws throughout the South. She was the first black woman elected to the state Senate in New York, the first woman elected Manhattan Borough President, and the first black woman appointed to the federal judiciary.

Civil Rights Queen captures the story of a remarkable American life, a figure who remade law and inspired the imaginations of African Americans across the country. Burnished with an extraordinary wealth of research, award-winning, esteemed Civil Rights and legal historian and dean of the Harvard Radcliffe Institute, Tomiko Brown-Nagin brings Motley to life in these pages. Brown-Nagin compels us to ponder some of our most timeless and urgent questions--how do the historically marginalized access the corridors of power? What is the price of the ticket? How does access to power shape individuals committed to social justice? In Civil Rights Queen, she dramatically fills out the picture of some of the most profound judicial and societal change made in twentieth-century America.

THE EYES ON THE PRIZE CIVIL RIGHTS READER

MSRP: $24.00
Now: $20.00
Was:
This volume is one of several produced in conjunction with the 14-part PBS Eyes on the Prize television series. It is a collection of over 100 court decisions, speeches, interviews, and other...

The Movement: The African American Struggle for Civil Rights

THE CIVIL RIGHTS MOVEMENT (BLAST BACK!)

MSRP:
Now: $10.95
Was:
This deck of 48 Knowledge Cards offers a concise illustrated history of the civil rights movement and a chance to make the acquaintance of many brave, brilliant people. Each card has a photo of an...

NEW DAUGHTERS OF AFRICA: AN INTERNATIONAL ANTHOLOGY OF WRITING BY WOMEN OF AFRICAN DESCENT

MSRP:
Now: $32.99
Was:
Twenty-five years ago, Margaret Busby’s Daughters of Africa was published to international acclaim and hailed as “an extraordinary body of achievement . . . a vital document of...

MSRP:
Now: $5.99
Was:
This board book introduces young children to key values, such as kindness and giving, with gentle rhymes and adorable artwork.

MSRP:
Now: $27.99
Was:
Laila desperately wants to become a mother, but each of her previous pregnancies has ended in heartbreak. This time has to be different, so she turns to the Melancons, an old and powerful Harlem...

MSRP:
Now: $13.99
Was:
Race matters, but only so much--what's most important is who we are on the inside. Looking beyond skin, going straight to the heart, we find in each other the treasures stored down deep. Learning to...

MSRP:
Now: $14.95
Was:
✨WOMEN’S EVERYDAY JOURNAL: Purposely expressing gratitude is a great way to combat the stress of everyday life. Being grateful, gives you a chance to focus on all the good, and shifts your...

Be Antiracist: A Journal for Awareness, Reflection, and Action

MSRP:
Now: $15.99
Was:
Antiracism is not a destination but a journey--one that takes deliberate, consistent work. Ibram X. Kendi's concept of antiracism has reenergized and reshaped the conversation about racial justice in...

MSRP:
Now: $9.95
Was:
Practicing gratitude is easy, and the benefits are huge. In this little book of essential mindfulness and coloring, bestselling author and teacher Cher Kaufmann helps readers to focus on the good and...

MSRP:
Now: $17.95
Was:
According to the Anxiety and Depression Association, a staggering 40 million American adults experience anxiety. Kathleen Adams, LPC, has distilled her 35 years of clinical experience into this...

Eeboo How Am I Feeling Conversation Cards

MSRP:
Now: $14.99
Was:
Emotional literacy provides an essential foundation for empathy, socialization, and self-understanding. Use eeBoo's How Am I Feeling? conversation cards to interpret facial expressions and inspire...