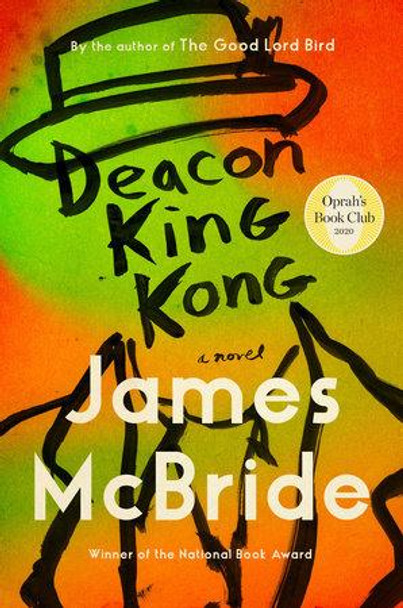 "From James McBride, author of the National Book Award-winning The Good Lord Bird, comes a wise and witty novel about what happens to the witnesses of a shooting. In September 1969, a fumbling, cranky old church deacon known as Sportcoat shuffles into the courtyard of the Cause Houses housing project in south Brooklyn, pulls a .45 from his pocket, and in front of everybody shoots the project's drug dealer at point-blank range. The reasons for this desperate burst of violence and the consequences that spring from it lie at the heart of Deacon King Kong, James McBride's funny, moving novel and his first since his National Book Award-winning The Good Lord Bird. In Deacon King Kong, McBride brings to vivid life the people affected by the shooting: the victim, the African-American and Latinx residents who witnessed it, the white neighbors, the local cops assigned to investigate, the members of the Five Ends Baptist Church where Sportcoat was deacon, the neighborhood's Italian mobsters, and Sportcoat himself. As the story deepens, it becomes clear that the lives of the characters--caught in the tumultuous swirl of 1960s New York--overlap in unexpected ways. When the truth does emerge, McBride shows us that not all secrets are meant to be hidden, that the best way to grow is to face change without fear, and that the seeds of love lie in hope and compassion. Bringing to these pages both his masterly storytelling skills and his abiding faith in humanity, James McBride has written a novel every bit as involving as The Good Lord Bird and as emotionally honest as The Color of Water. Told with insight and wit, Deacon King Kong demonstrates that love and faith live in all of us"--
View AllClose

MSRP:
Now: $15.99
Was:
A daring and brilliant novel that explores race and class in 1950s America, witnessed through the experiences of Nat King Cole and his driver, Nat Weary. The war is over, the soldiers are...

MSRP:
Now: $7.99
Was:
The story of Sundiata, son of the king of Mali in the time of the great trading empires of Africa some eight hundred years ago, is a powerful tale of courage and determination. As a boy, Sundiata was...

THE KING OF KINDERGARTEN

MSRP:
Now: $17.99
Was:
Starting kindergarten is a big milestone--and the hero of this story is ready to make his mark! He's dressed himself, eaten a pile of pancakes, and can't wait to be part of a whole new kingdom of...

MSRP:
Now: $30.00
Was:
In the tradition of The Boys in the Boat and Seabiscuit, a fascinating portrait of a groundbreaking but forgotten figure—the remarkable Major Taylor, the black man who broke racial barriers by...

GET OFF YOUR ASS AND RUN!

MSRP:
Now: $7.00
Was: $13.95
Is there a large ass-shaped dent in your sofa? A gym membership burning a hole in your bank account? Does the sight of your wobbly thighs leave you cowering under a blanket? Then it’s time you...

MSRP:
Now: $10.00
Was: $27.99
High-Intensity Interval training is the top fitness trend in the U.S. according to the annual survey conducted by the American College of Sports Medicine... and for good reason! HIIT is widely...

MSRP:
Now: $16.00
Was:
The New York Times best-selling book exploring the counterproductive reactions white people have when their assumptions about race are challenged, and how these reactions maintain racial...

A Deeper Love Inside: The Porsche Santiaga Story

MSRP:
Now: $17.00
Was:
In the New York Times bestseller from the author of the Coldest Winter Ever, the Santiaga family saga continues, this time told by Porsche Santiaga, Winter’s fiery younger sister. ...