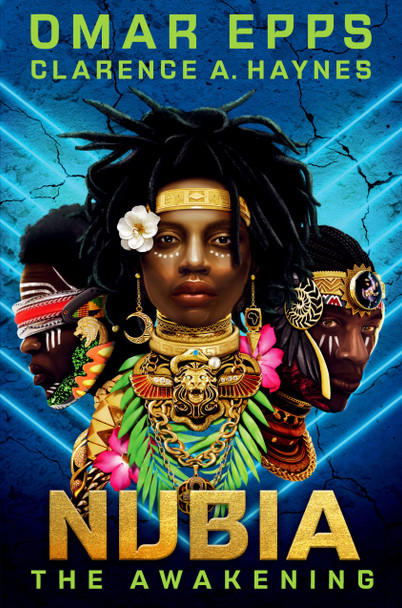 For Zuberi, Uzochi, and Lencho, Nubia is a mystery. Before they were born, a massive storm destroyed their ancestral homeland, forcing their families to flee across the ocean to New York City. Nubia, a utopic island nation off the coast of West Africa, was no more, and their parents’ sorrow was too deep for them to share much of their history beyond the folklore.

But New York, ravaged by climate change and class division, is far from a safe haven for refugees, and Nubians live as outcasts, struggling to survive in the constantly flooding lower half of Manhattan, while the rich thrive in the tech-driven sky city known as the Up High.

To many, being Nubian means you’re fated for a life plagued by difficulties and disrespect. But Zuberi, Uzochi, and Lencho are beginning to feel there might be more. Something within them is changing, giving each of them extraordinary powers. Extraordinary and terrifying powers that seem to be tied to the secrets their parents have kept from them.

And there are people Up High watching, eager to do anything they can to become even more powerful than they already are. Now Zuberi, Uzochi, and Lencho will be faced with the choice—do they use their inheritance to lift their people, or to leave them behind. The fate of their city, and their people, hangs in the balance.

MSRP:
Now: $15.99
Was:
Purpose Awakening, the breakout book of international speaker Touré Roberts, is about that transformational moment when you are awakened to the purpose of your life. Your life began...

The Awakening of Malcolm X: A Novel

MSRP:
Now: $17.99
Was:
The Awakening of Malcolm X is a powerful narrative account of the activist's adolescent years in jail, written by his daughter Ilyasah Shabazz along with 2019 Coretta Scott King-John Steptoe...

MSRP:
Now: $29.99
Was:
Once a member of Batman Incorporated and deputized by the Dark Knight himself, Batwing, the Batman of Africa, has quit. Luke Fox, the son of Bruce Wayne’s trusted ally Lucius Fox, has emerged...

Self Care for Black Women

MSRP:
Now: $15.99
Was:
Prioritize your wellbeing with these 150 self-care exercises designed specifically to help Black women revitalize their outlook on life, improve their mental health, eliminate stress, and...

MSRP:
Now: $2.25
Was:
12" Wooden Ruler made in U.S.A of American-grown basswood, with standard and metric scale on one side, a list of jazz musicians and composers on the other. Made in United States of America

Pre-Order The Light We Carry: Overcoming in Uncertain Times

MSRP:
Now: $32.50
Was:
November 15, 2022 There may be no tidy solutions or pithy answers to life’s big challenges, but Michelle Obama believes that we can all locate and lean on a set of tools to help us better...

Illustrated Black History: Honoring the Iconic and the Unseen

MSRP:
Now: $40.00
Was:
Illustrated Black History is a breathtaking collection of original portraits depicting black heroes—both famous and unsung—who made their mark on activism, science, politics,...

MSRP:
Now: $9.99
Was:
This visual celebration of Michelle Obama from an official White House photographer is perfect for young readers who want to know more about a beloved former First Lady.This stunning and revealing...

MSRP:
Now: $7.99
Was:
Vote with Susan. Dream with Martin. Kneel with Colin. Stand for change.From Samuel Adams to the supporters of Black Lives Matter, march through history with over twenty heroic leaders whose peaceful...